SIn the lead up to this year’s festival, we wanted to celebrate 30 years of Beltane with a series of posts looking back at experiences of the festival over the years. We’re starting with seasoned Beltaner, Tom Gibson’s memories of 1996. 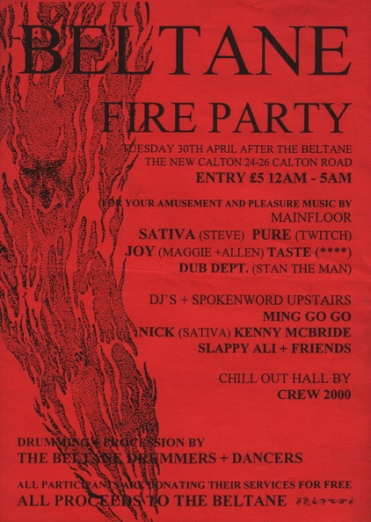 The Beltane 1996 After Party Flyer 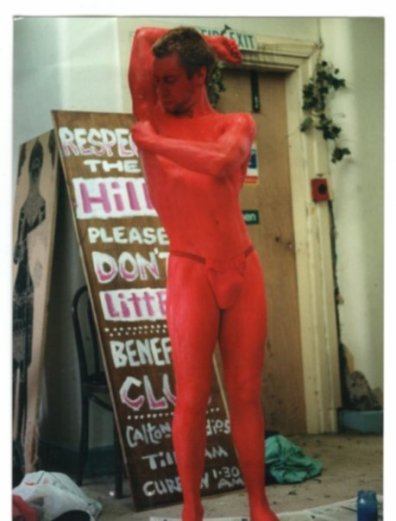 “My first experience of Beltane was in 1996. I was working in a cafe in Stockbridge and my workmate, Morag, was a photographer. Her latest project was to document the getting-ready space of a group of performers who were putting on a fire show on Calton Hill.

Having recently moved to Edinburgh, I’d never heard of the festival but was happy to go along to see what was going on. The space turned out to be a floor of an old empty store on South Bridge. It seemed like wonderful organised chaos with costume-creating, prop-making, and choreography all happening at once. There was a person busy on the phone behind a table loaded with paperwork. On seeing me, he leapt over and, after introductions, stated that as I had red hair I could be a red man. When I questioned what it was, he informed me they were the spirits of anarchy, chaos and sexuality; I said yes.

This person was ‘Mad Mark’ who, along with Mark Oxborough and Martin Danziger organised the Reds and ran the workshops. The Reds were a very mixed group at that time, both in terms of physicality and age. As there was no acrobatics back then and the role was more condensed than maybe it is today, the height of physical endeavour required was for us to be able to run up and down the red slope a number of times without keeling over. More time was spent on characterisation and the ultimate goal of being able to embody red even when stood stock still – just by the force of life emanating from our still bodies and through our eyes.

My first experience of being Red came at the AIDS hospice, Milestone House. We had arranged to do a mini-Beltane around the hospice grounds lead by a few Beltaners and using the children of the residents as the bulk of the performers. So we bundled along to do some movement and costuming workshops through the day with the children. Chloe Dear got a couple of mini-Blues to help her, I had a few mini bundles of chaos, and the May Queen had a troupe of child Whites. Our procession and the dance between the Green Man and May Queen was a bit more courtly than usual, and ended with a small bonfire being lit whilst parents and others in the hospice looked on with bemusement.

The night of Beltane itself passed in a bit of a blur. I can’t even remember if I stayed on The Hill dancing to the drums until dawn as was the tradition back then. However, I do remember Mark and Martin coming over to me after Bower and telling me that they weren’t organising Red the next year and would I take on the role of “Chief of the Redmen”? I didn’t think I had the skills to be able to take it on, but I did. And even now, after 21 years of organising groups, being Blue, chairing Beltane fire society and producing the festival, I still have that same nagging feeling at the back of my mind. I worry that any moment people will find out that I’m not nearly as knowledgable as people seem to assume, but I’ve come to realise that this is an experience that many of us share.”

To get a feel of how Beltane was in 1996, check out these two rather trippy videos edited by Ay Law using old VHS footage:

We’d love to hear your stories from Beltane 1996, or any other year. Leave your comments below or get in touch with socialmedia[at]beltane[dot]org if you have a story to share.