This year’s elected Trustees are…

I’m Alun and I’m the Chair of the BFS Board of Trustees. I see my role as a mediator and facilitator who’s there to make sure that people get to have their say. I’m also involved in the complaints procedure and work closely with the Event Coordinator.

After having witnessed Beltane for many years I finally joined in as a performer in 2012 and have not looked back. Like many people, this Society means a huge deal to me and I feel privileged to be a part of it.

I am Festival Secretary, and I handle communications from within and outside of the Society in relation to our festivals. This includes working with Group Organisers as well as the Event Co-ordinator, Blues and other Trustees to help the events run smoothly.

I’ve been part of BFS since Beltane 2012 and I’ve performed in every festival since then. I’ve been a variety of groups doing a number of different things from building puppets to represent the Elements through to performing in a fire dancing group and being Red. I’ve been a GO twice in that time and I joined the Board of Trustees for BFS in 2014.

If you are interested in joining the Society, if you have ideas of outreach projects (or are part of an organisation you think we could work with), or you have general queries or comments about membership please email me. Or just email me anyway for a chat; I have way too much free time! I have been a member of BFS since 2006, and GO’d numerous groups at both Beltane and Samhuinn. BFS is a fantastic Society; an opportunity to meet wonderful people, to gain new skills and generally to have a huge amount of fun. This is my first year as a Trustee, but hopefully not my last!

Hi, my name’s Tom and as a Blue and Trustee I’ve been asked to put together a short piece to introduce myself to our wonderful Society. This year is the twentieth since I first got involved with the Beltane Fire Society. I remember visiting an empty department store on the bridges where it was being organised that year and ran into one of the old hands, Mad Mark who, given that I have red hair, invited me to be a Redman that year whom he described as being the spirits of anarchy, chaos and sexuality. During the Beltane that year Mark told me he was standing down as “Chief o’ the Redmen” and ask if I I take over, which I did. This was the first of many roles I was to take in the Society, going on to organise Red, White, Water, becoming Chair of the Society, long-standing Trustee, Producer, Green Man and Horned God, as well as running many performance and movement workshops for many other groups.

The Society has gone through lots of big changes in the time I’ve been involved – the ongoing gender issues where we removed unnecessary gendering from groups such as Red, White and Blue; the introduction of a more democratic way of choosing our Group Organisers and who runs the Society; the introduction of ticketing for the event; becoming a charitable company with limited status, and many more.

The best of Beltane for me is that it isn’t a set thing but has the malleability, the ability to be whatever it needs to be for the people that are involved that year. Trustees, Blues, Event Coordinator etc just provide a framework; the volunteers make it what it has to be that year.

One of the reasons I still do it is that I get a lot out of being able to help facilitate the massive amount of learning and deep experiences that people have when doing stuff with us. I’m not here to show people how to “do” Beltane or to make sure they aren’t “reinventing the wheel”. Personally I think reinventing the wheel is important for people as ownership of the festival and their performance and personal ritual is very important and is enhanced by being allowed to experiment and fail as well as succeed. As such, I see my role within the Society more to make sure the wheels (no matter what size or shape) don’t fall off, even if it can make the ride a bit bumpy.

Photo of Tom by Stuart Barrett. 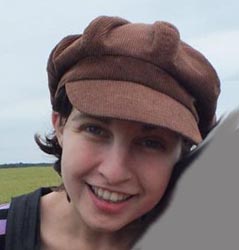 Hi, I’m Dani. I’ve been involved in BFS events since Samhuinn 2008 (stewarding) and took the career path of Beastie – White – Processional/Winter Drummer over the years, GOing some of these in the process. On the Board I’ve mainly been in charge of supporting GOs through info material and digital resources, which I hope to improve further as I go along. I’ve also started to collate the vast amount of information on Beltane by Beltaners that’s out there, hoping to get it all in one place eventually. I’m especially interested in hearing from you if you have been a GO or prospective GO and have input on how we can improve providing information about BFS and GOing. Drop me a line – I look forward to hearing from you!