This information is from Beltane Fire Festival 2015. It will be updated in time for next Beltane but is being left in place until then for anyone who wants to read about the festival. 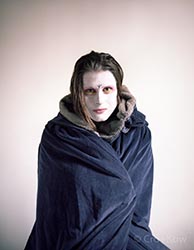 Anna Chaney
My first Beltane was when I was about seven years old. I went with my Mum. I have this memory of a man dancing through the air, wearing shimmering gold body paint, a wreath of golden leaves and not much else. I remember the flames and the drums and the people and the MAGIC.

Years later I would go to watch Beltane as a teenager. One night I couldn’t really see anything and not much seemed to be happening around me until I turned round and saw a row of Whites coming towards me. Beautiful. Strong. Focused. Instantly I thought: I want to do that.

And I did. I couldn’t believe I was a White Woman! I was painfully shy at the time, hovering on the edges of the group; but they gave me the confidence and courage to grow as a person for which I am eternally grateful. I explored White for three more years until I joined the Reds. I fell so com-pletely in love with the people and the ethos. I spent three years as Red and there will forever be a wee red flame burning in my heart.

The invitation to become the May Queen was one of the greatest honours of my life so far. The May Queen is a perennial role within our society that carries core traditions such as heading the procession and lighting the bonfire. Emerging from the Earth on Beltane eve, the May Queen embarks on a journey around the hill that culminates with the death and rebirth cycle of the Green Man. She accepts him as her consort and they spark the start of summer by the lighting of the Bonfire.

One of the privileges of representing this ineffable figurehead is the practical role of gathering and coalescing all the characters, witnesses and people into one centralised space. Everyone is there for the purpose of being together because they want to be – to celebrate and connect. I think BFS provides an outlet for a lot of our members to express this basic need of the human spirit, which is not always easily allowed to flourish in modern city culture. For me community is sacred. And the fact we create one every year in the heart of the city is super cool!

My favourite part of the night is the Bower, our family home, where the Reds and Whites come together and then they bring everyone in – to dance!

Photo of Anna, above left, by Jasper Schwartz and above right, by Simon Crofts and Sylwia Kowalczyk. 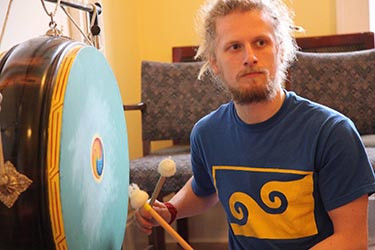 Will
My name is William but most folks call me Will. I arrived in Edinburgh 3 weeks before Samhuinn 2014 where I took part as a member of Tech, and what a rich and beautiful experience that was. The crew where so welcoming and kind. They did everything in their power to incorporate me, an outsider, into their tight-knit humble little group.

At the beginning of this evening myself, Andy Blue and his wonderful wife Karin where tasked with the job of delivering the Neid Fire, however on our journey to the stage the gods of wind decided to take the flame from us, so Andy and I hopped over the gate of Princes Street Gardens and awaited the procession, at which point we relit our torch from one of the Torchbearers. At this point, Andy turned to me and said, “Will, you should carry this”. My heart jumped out of my chest. At the time I did not know why, or even the relevance of what it was I was doing. Regardless, I felt deeply honoured to do such a thing.

Paying our silent respects to the fire that was being carried, we walked to the stage – a walk which felt naturally ritualistic, like something known and unknown was guiding us. As we approached the stage, Andy talked me through the lighting of the fire for the sculptures and then the lighting of the various other artefacts around the stage, which we did together. In those moments, I felt I was not only helping to light the stage fires. I was recognising and paying homage to the fire within myself and all those whom had gathered to take part in this beautiful event.

At the end of the night, after taking the stage down and packing everything away, we where ready to head to the after party. However, I was taking my time getting changed out of my boiler suit which smelt like I had just had a bath in paraffin. The group was standing in a circle waiting for me to join them but I was taking my time so they all ran at me from the other side of the Mound and formed a circle around me, which seemed to be a majestic symbol of the awesomeness this group of beautiful souls had to offer. At this moment, I felt unquestionable love for what I now know to be that spark that is the Beltane community.

Before then, I had only heard of Beltane in passing and had never imagined I would be taking part in such a magical experience. I literally had no idea about the role of the Green Man. I guess, back then, Teching was really the start of this Green Man journey, although I was oblivious to it. My only hope is that I carry that torch for the Beltane community in a manner befitting those whom carry that flame, and that I do the role the justice which is befitting the caring, decent, non-judgemental, beautiful beings that make the community that is Beltane Fire Society.