This information is about the 2016 event and is here for reference only. The site will be updated for 2017’s festival early next year. 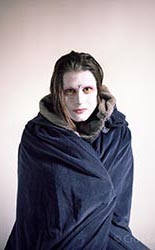 I first took part in Beltane as a White in 2005. I’ve done three Beltanes as White and three as Red and participated Samhuinn as White, Red and Blue.

The May Queen is a Goddess representation of summer. There is a Scottish tradition that tells of the Cailleach turning herself into stone at the end of her winter reign and then on Beltane Eve, she awakens in her maiden form. If you have seen the acropolis sequence at the start of our performance that is what is happening then. The May Queen rises from the Earth and she blesses the elements and welcomes the audience. She has gone through a major transition but her counterpart; the Green Man is still in his winter guise. Beltane Eve is a liminal night as both deities are discordant with each other. The May Queen embarks on a journey around the hill to gather the new season while the Green Man must cast off the residues of the past winter. Only when he is ready will she accept him as her consort and this culminates with the death and rebirth cycle of the Green Man.

Once the union has been made, the May Queen and Green Man light the bonfire. For me, this is the ultimate symbol. I always like to think of it as the marriage between the earth and the sky. It starts from the first sparks of the neid fire and becomes the often towering inferno of the bonfire. This is an ancient Celtic tradition when people would extinguish the fire in their hearths and congregate to start a new one to mark the start of summer.

One of the privileges of representing this ineffable figurehead is the practical role of gathering and coalescing all the characters, witnesses and people into one centralised space. Everyone is there for the purpose of being together because they want to be – to celebrate and connect. I think BFS provides an outlet for a lot of our members to express this basic need of the human spirit, which is not always easily allowed to flourish in modern city culture. For me community is sacred. And the fact we create one every year in the heart of the city is very cool. 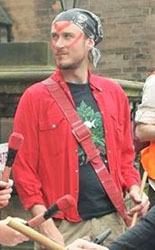 I witnessed my first festival when I was travelling through Edinburgh in 2006 and was enchanted by the power of the ritual, somehow ending up in the club afterwards and up Arthur’s Seat for the dawn. I finally joined BFS in as a Red in 2013 and have been a Red or Beastie at every Beltane and Samhuinn since.

The Green Man is the personification of life, the flame that animates and moves all living things. Like a fire, he is in a constant dance of change, and like a fire, he is immaterial when distanced from the Earth, his consort, the Goddess. Together, they cycle through a wheel of change that dances them as much as they dance it.

In this year’s telling, the Green Man is the discordant note that sets the key for the new symphony. His journey is the journey of his own purification, and yet paradoxically, it is by straying from his path that he returns to it with the energy needed to drive forth the wheel of change. And so, even if from the ground level the world appears damaged and unbalanced, from high above, there is no good or evil, but the wheel turns and turns, and all is as it should be.

In his winter aspect, as the Horned God, he has been preserving the flame through the darkness. As his consort is reborn as the May Queen, he feels the season turning, and prepares to release his spark back out into the earth. But he has grown cold over the winter, and is not fully aware that he, too, must transform, must leave the past behind if the new season is to flourish.

As the procession enters the underworld, he unleashes his flame. Yet in doing so, he is spent, and cannot follow his bride into the new life. But the will inside him refuses to die. He resists the wheel of nature, and lets himself be smuggled by mischievous sprites past the guardians of the fire arch.

Meanwhile, from the ashes of his final flame, the Reds awaken.

In the underworld, he grows younger, stronger. Yet his is now a discordant presence. As the May Queen gathers together the elements, the Red energy he has unleashed threatens to destabilise the wheel of change, even as it drives it forward.

Forgetting himself, the Horned God’s quest becomes distorted, and he is drawn away from the procession into the pleasures of the moment. The desire to bring forth new life becomes a desire to preserve his own. The need for union and balance with his Queen becomes a lust to possess and own her.

When their paths reunite, the wave of change is unstoppable, bigger than them both, but intensely unstable. As the elements are combined, driven into a frenzy by the overflowing Red energy, the whole world reaches the point of bursting.

But the May Queen recognises that he has not left himself behind, and that to unite now would be disharmonious and disastrous for them all. Willing the change, but not like this, she turns away.

Driven mad, the Horned God realises that he is dying. The ego that he ought to have left behind at the beginning rebels, desperate to hold on, to perpetuate itself at any cost. He tries to take the May Queen by force, but…

Touching her, he sees her as she truly is. And he sees himself for what he has become. He remembers that their journey is a shared journey, and sees how far he has strayed from their path. Accepting at last that his surrender is necessary, he offers himself as a sacrifice, and dies.

The May Queen draws all the power of the earth to bring him back to life.

And reborn, he has left his past and ego behind, and is now an empty space, ready to unite with his Queen, and bring forth between them the new season, something greater than themselves. Fire unites with earth, and again the wheel turns.