This page is here for reference only as details may change for 2017’s festival. 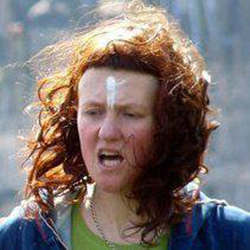 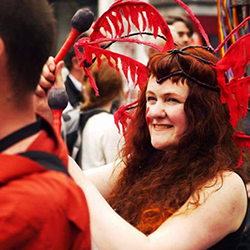 I’m a born and bred Edinburger though I’ve lived away from the city at various points in my life. My first involvement with the Beltane Fire Society was in 2005 and I’ve been a member of various groups in a total of ten BFS Beltanes or Samhuinns since then. BFS gave me my first ever sense of supportive community in Edinburgh and I’ve been so grateful for that and struck by how this evolving community is made up of people from so many countries and with such a variety of identiities. It is truly a space welcoming of diversity in all forms and has aided me hugely in strengthening my sense of unique self in the world and my ability to dare to show that self openly.

This Samhuinn I’m honoured to have been chosen to be Cailleach and my focus in this role will be on the inevitability of my bringing of Winter, and that Winter is a time of inward-looking where we may come up close to our personal demons. As someone with life-shattering experiences of the extremes of depression and anxiety, I am convinced that facing our demons – with support – and finding out what they may have to teach us aids us in becoming people with a resilient strength that incorporates rather than avoids our vulnerabilities and I will be holding that imagery in my mind for myself and for anyone else who feels a resonance with it as I create my part in the Samhuinn night’s ritual performance over the coming weeks.

Photos of Diana by (from left) Kat Kane and Bleu Hope 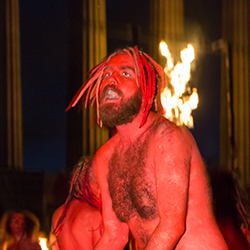 I’ve been involved with BFS for a fair few years now as a performer, a Group Organiser and on the Board of Trustees. Throughout my time with the Society I’ve always been drawn to the summer groups and what could be more summery than the Summer King?

I joined BFS in 2007 and have taken part in almost every festival since then. I’ve been a performer in a range of different groups as well as Group Organiser for Reds four times and once for Winter Drummers. Over the years the festival has changed my life in so many ways and I’ve learned a huge amount in this time, from stilt walking to acrobatics, drumming and fire performance. Most of all, I have inherited a wonderful, beautiful, crazy extended family in the BFS community, made lifelong friendships and had experiences that I will carry with me for the rest of my days.

I’m incredibly honoured this year to be taking on the role of the Winter King at Samhuinn, who for me represents a darker, harsher, more pragmatic aspect of the Green Man. Like any father, he loves all of the life he has helped to create just as much as the Summer King. From humans and animals, to insects and plants, from the tiniest microorganisms to the blades of grass under our feet, he sees each and every one as his children. But he knows the harsh reality of the Winter that the Cailleach brings. He knows that his energy to inspire life to push on through the hardship that comes is not limitless. If any life is to survive into the new year, he will have to make an agonising decision…a choice between his myriad children…between those who will survive the winter, and those that he must allow to perish for the greater good.

Photos of Dave by (from left) Felix Hartsuiker and Raini Scott