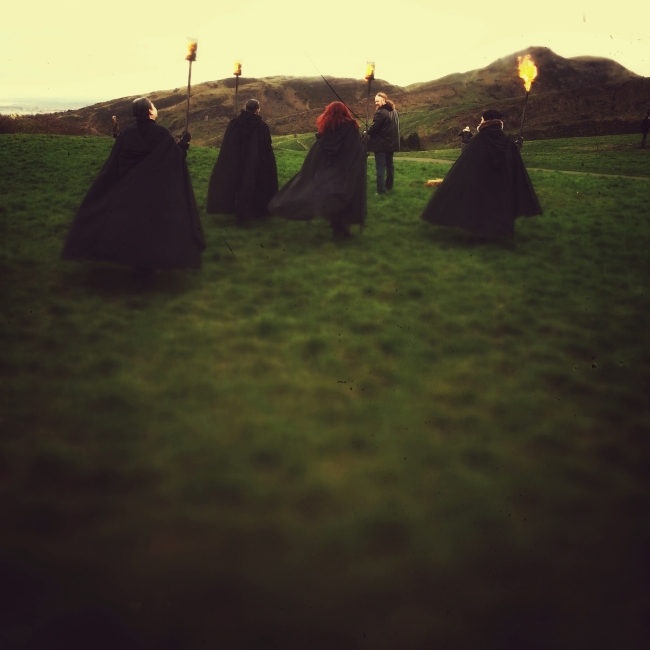 An update from Tanya, GO of Torchbearers about recent rehearsal

The thing with rehearsing in public places is that you suddenly become very interesting. You become a flash mob tourist attraction. People stop and stare. A lot. They take pictures. They film you. You find yourself wondering what they make of the spectacle of a group of black-cloaked people guarding the path of an invisible procession around Calton Hill.

Sometimes they nervously approach you and ask what’s going on and who you are, and when you explain it all to them, they ask where they can find out more and where they can get tickets for Beltane. Sometimes you catch shards of conversation as people walk around you (always around, never through, because for some reason they don’t cross your path) like “It’s those ones that paint themselves and dance around…they give me the heebie jeebies” or “They do that fire thing, you know, the big festival”. But mostly they just watch.

The Torchbearers’ rehearsal on Calton Hill last Saturday was no exception. We might have been an intimidating sight if it wasn’t for the laughter and chatter emanating from the group. People who had climbed onto the acropolis took a step sideways to watch the lighting of the Neid Fire, balancing on the edge and leaning around to take pictures of a tradition and the catching of a spark.

When Photo Point arrived to shoot our live fire practice as the daylight faded, we found ourselves surrounded by an ever-growing crowd. People with cameras saw people with cameras and we became memories, captured on film and in pixels. It’s slightly unnerving, but it’s good practice for the full-cast walkthroughs, which attract groups of tourists, locals, random wanderers, and of course for the night itself, when the crowd grows to thousands and the atmosphere is crackling with the static of excitement.

We light our fires and people are drawn to the flames. They, our witnesses, become part of the event and somewhere in the inference pattern of perspective between ritual and celebration and doing and watching and knowing and interpreting, a unique experience is created, and it is beautiful.

One thought on “Nothing attracts a crowd like a crowd”