In our sixth ‘Tales from Beltane’ guest post, Richard talks about the audience experience that inspired him to take part in the festival and build his photography skills… 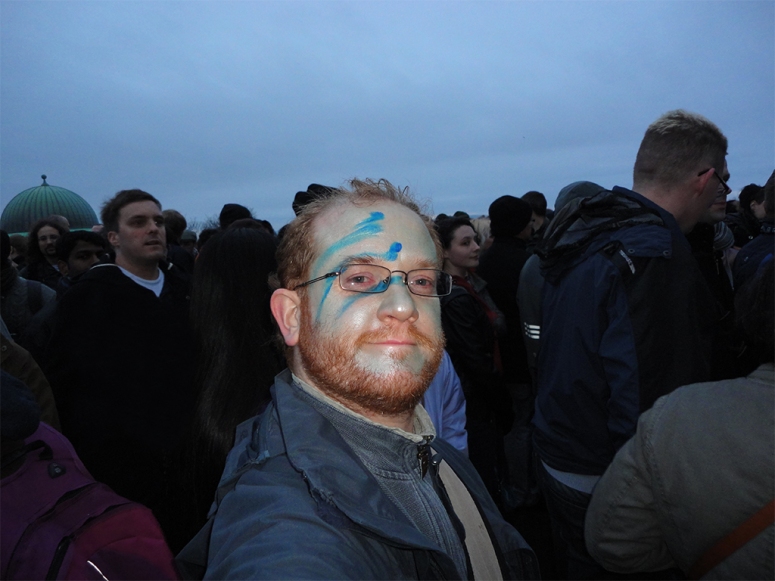 After many years of telling myself that I would do it “one year”, I finally went to my first Beltane as an audience member in 2012. I think everyone who ventures up the Hill for the Beltane Fire Festival does so having heard one or two wildly salacious tales about what is involved, and I had heard one or two myself. I made my way up the Hill not quite certain of what might await me during the evening. What I found was a hilltop full of people, and an atmosphere of excitement and anticipation. Darkness was yet to fall, so I busied myself taking photographs of the assembling crowd (quite a few of whom were in costume) and what members of the BFS folk I could find.

Not knowing quite where to stand for the start, and only vague notions of the actual route of the procession, I eventually found myself gravitating to the front of the National Monument, along with what seemed to be the rest of the audience. The sky darkened, and then I saw the first glimmers of fire that indicated the start of proceedings. From that point, I was entranced, from the May Queen descending down from the Monument, through fire displays on a stage down the hill, to drums and red people on the other side, interspersed with giant roaming puppets.

Then there was the stage. Since I was a first timer, I got to the stage somewhat late, having followed the procession around the Hill, and the large crowd made it impossible for me to get as close as I wanted to be. Then there were the cameras – oh, the cameras! On sticks, on tripods, handheld phones recording video… And all the time, the story unfolding on stage, my understanding of it at only the skimpiest of levels. I knew that “something” had occurred when the cheering and whooping occurred, but I was adrift for the rest. Somehow, this did not seem to matter much. I was hooked.

Some time after this astonishing night, while looking at my rather blurry images, I realized two things. One, I wanted to get myself a camera that would allow me to capture better images of this sort of event, and two, I wanted to be involved in the Society as one of the official photographers, to get a chance of getting something close to the images I could see via the Society’s Facebook and Flickr pages. It seemed highly unlikely at that time, but eventually, as it turned out, that is exactly where I found myself a year later.

You can buy tickets to Beltane 2015 from The Hub. If you would like to get involved in this year’s festival, you are welcome to come to the Open Meeting.