This Samhuinn, Colin and Alison from Torchbearers are lighting the Neid Fire at the beginning of the festival. Colin shares the story behind this sacred spark…

Our Beltane and Samhuinn festivals are all about celebrating the changes of the seasons, and rediscovering or reinventing old traditions that mean something to us and bind us together as a community and connect us, in some small way, to the Celtic roots of the festivals.

The most prominent and spectacular feature of our Beltane and Samhuinn fire festivals is, of course, the fire: the blazing torches that light our procession and performance, the fiery props wielded by fire performers, the towering fire sculptures, and the bonfire at Beltane. So it should come as no surprise that one of the old traditions that we’ve revived relates to fire.

The making of fire is surrounded by traditions and ritual. It’s easy to see why this should be: fire has always been of great importance to human survival, but lighting a fire from scratch is not a trivial feat, and is hard to do reliably; methods and techniques are passed down as rituals and traditions.

The Samhuinn festival starts with the Torchbearers lighting the fire, using one of the oldest methods of making fire known to man: the friction of wood on wood. With a bow, a hazel spindle, a pine hearth board, and some good old-fashioned elbow grease, we create a single, smouldering ember. 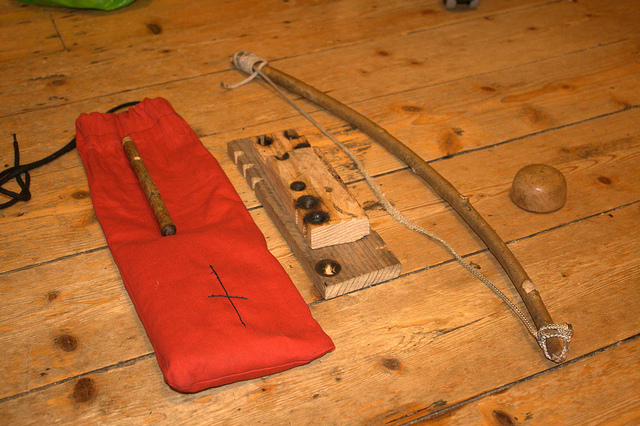 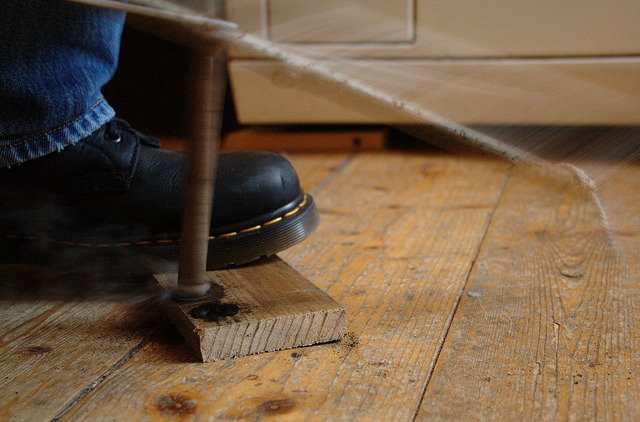 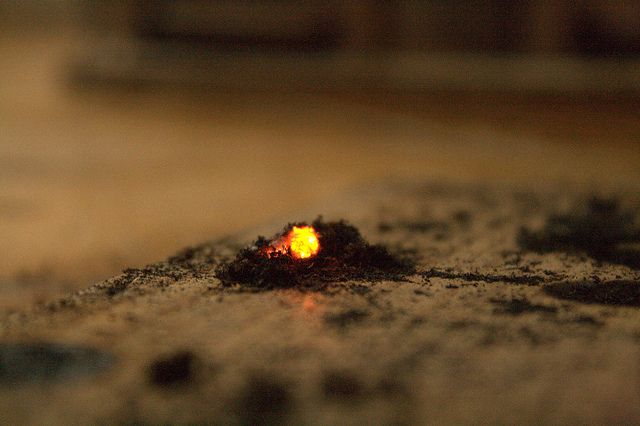 From this ember we light kindling (in spectacular style), and from the kindling we light our torches. From our torches we light the props of the fire performers, and the fire sculptures. Every flame in the whole festival can trace its ancestry back to that one tiny ember. We all carry part of the same fire, uniting us as a group and a community. 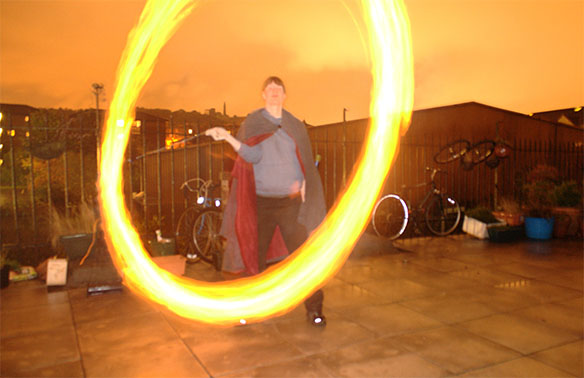 Alison spins the ember with kindling to make fire happen!

Traditionally this Neid Fire would be spread throughout the community at large, relighting everyone’s lamps and hearths, and the fire would live on in the community. Our Neid Fire lives only as long as the festival’s performances, but in some way burns on in the memories of all those who watched and those who took part, and in the photographs taken by the audience and our own photographers.

Usually at Samhuinn, the Neid Fire is lit in comparative obscurity in a corner of the Castle Esplanade, but this Samhuinn we will be lighting the fire on stage in Parliament Square, around 8:20pm, before carrying the flame to the procession, so this will be perhaps the best chance to see the process in action!

All photos by Colin McEwan

3 thoughts on “The tradition of the Neid Fire”