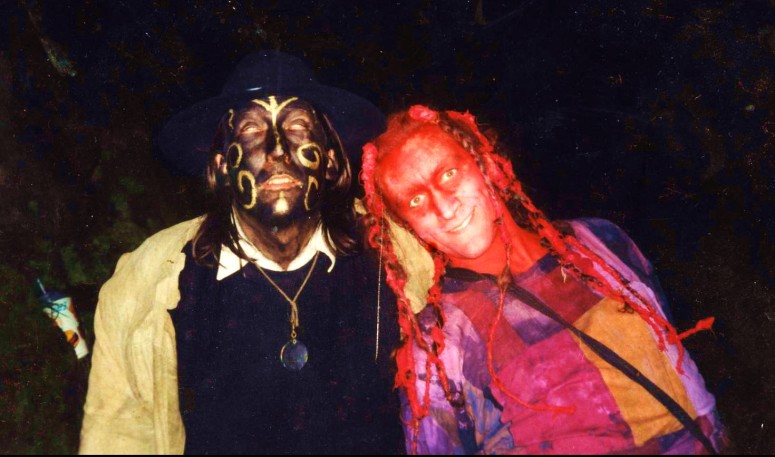 In the first of our Samhuinn Through the Years stories, we’re excited to share the words of Mark Oxbrow, one of the originators of BFS’ Samhuinn Fire Festival…

In the early years of Beltane I wandered around the Hill with a few thousand other folk and woke up among the survivors to watch the sunrise. The first thing I did in BFS was help make and carry giant puppets. I was a Red Man for many years and did weird production things including police liaison, gathering and building the bonfire, blowing up goat skeletons and helping dismantle Water Point’s massive scaffolding arch! I even produced a madcap family Lughnasadh at Blackford Hill and the Hermitage.

The biggest thing I did was put the first few Samhuinn Festivals together. I’d been doing a lot of looking at medieval plays, and historical Beltane and Halloween festivals, and wanted to do something with darker, more ancient roots in Edinburgh at Halloween.

I always loved Halloween. I grew up guising around my street, telling jokes and getting chocolate and sweeties. I love ghost stories and witches, and goblins and bad fairies. The dark nights were gathering in. Winter was coming. And the snow and ice and the time of the little sun. Samhuinn is a boundary, a weird liminal space between the mortal world and the Never Never of fairies, wyrd sisters and the nucklavee. I’ve always felt that. I looked for places that felt like that. Places and times where I might see a pixie or bump into something that went bump in the night.

The first big Samhuinn, we organised. I walked down the Royal Mile with a deer skin and ivy about my shoulders and a full set of red deer antlers on my head as the Winter King. I was Winter King again a couple of times years later and ended up having a massive epic quarterstaff, claymore and fireball fight with Chick Allen from Clanranald as the Summer King.

I have so many memories from the first and all the Samhuinns! Mad Mark hiding Red pyrotechnic flares down his trouser leg! Us letting off white waterfall fireworks on poles in Parliament Square. Quiet moments at the Witches’ Well. Smashing fireballs off shields in front of a few thousand people. Being interviewed for a Wickerman documentary and fading into Christopher Lee! Girl Tom revealing the Cailleach and dancing as the jewels in her copper bodice sparkled in the firelight. Drums thundering down the Royal Mile. Lighting fire torches on the Castle Esplanade like some tattooed and dreadlocked anti-Tattoo.

Samhuinn has always been about making mischief. Big noisy fiery painty anarchic mischief. We light up where the world’s biggest Military Tattoo takes place. March down a medieval procession root in the heart of the city. Perform in Parliament Square in the shadow of the cathedral, the Advocate’s Library and the City Chambers – like some mad hatter at the Queen’s tea party.

Some years the conflict between Winter and Summer has been played down. I kind of think it should be as full-on and vicious as you can manage, and the two Kings need to look very different – folk need to know that Winter brings ice and snow and death. There’s nothing fluffy about it…the Unseelie Court are the Dead of Winter, the bad fairies, the ravening wolves and the end of all things.

This Samhuinn I’ll be in the Blue Mountains, near Sydney in Australia. This is where my family is now and I’m running the Spooky Family Fun Night at my daughter’s primary school! Every classroom door will be decorated with different themes like fairyland, wizards and witches, vampire castle, and pirates and mermaids. There’s not a few thousand people in the crowd but there’s a community of kids and parents and grandparents dressing up, jumping on a bouncy castle, and eating candyfloss, scary cupcakes and donuts on strings.

I look forward to Edinburgh’s Samhuinn living and growing wild and weird every year. To seeing the photos and watching the videos, and making it there in person some year. I’m looking forward to hearing stories of mayhem and high strangeness.

I’m massively proud of everyone that’s taken Samhuinn forward as it’s grown up. It’s a weird and magical beast, and it needs a lot of looking after. The Edinburgh All Hallows Fairs used to be held in the Old Town, down in the Grassmarket. Drovers brought their cattle in to the city for the largest fair of the year before the winter snows fell. They made most of their year’s money and spent a lot of it drinking and making mischief in the taverns. It ended in drunken riots and the whole fair was kicked out the city to Calton Hill. Eventually they were shifted out to Gorgie market.

Samhuinn will change. It will shift around. I hope it always remembers to stay spooky and make mischief. There are few truly great Halloweens in the world…the New York Halloween Parade, Mexico’s Dias de los Muertos, and Edinburgh’s Samhuinn. That makes me happy.

Keep playing. Keep making it different and new. It’s a living breathing thing – not a museum piece behind glass.